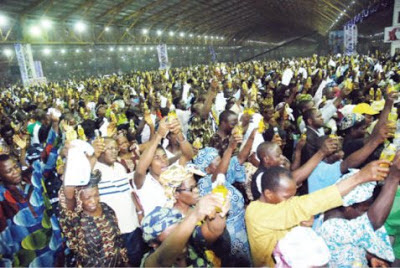 The environmental protection department said it had sealed off 22 premises on Wednesday after receiving dozens of calls a day, according to local newspaper reports.

Neighbours of one church -- Jesus Our Lord Divine Catholic Prayer Ministry -- said they were constantly disturbed by a congregation of mainly pregnant women, young mothers and their children.
"On my phone alone, I get 20 SMS on a daily basis," said Adebola Shabi, head of the Lagos State Environmental Protection Agency, according to the national daily New Telegraph.

"In the next five years, if there is no stringent policy on the siting of religious houses, there will be problem." Residents are complaining in unprecedented numbers that they can barely hear themselves think among churches and mosques where giant loudspeakers pump out religious messages and music.


Officials receive around 50 telephone calls and 20 text messages a day complaining about noise, mostly from churches, the New Telegraph said.

"With the enforcement today, we would have sealed about 55 premises because the last enforcement we carried out, we shut 33 premises," Shabi told reporters. "I gave approval for closure of 22 premises today, making 55."
on August 30, 2015