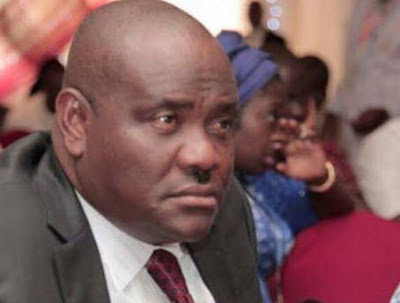 On September 11, 2015 SaharaReporters published an expose revealing that the judge heading the governorship election tribunal in Rivers State had received a bribe of N200 million from Governor Nyesom Wike to pervert the course of justice.

That compromised judge, Mu’azu Pindiga, was quietly removed as head of the election petition tribunal and reassigned to another tribunal as chairman of the National and state Houses of Assembly Tribunal for Court 2, handling state and national assembly elections petitions in Rivers State.

Despite his removal from the governorship tribunal and our our expose that his removal was due to the fact that he took bribe, Justice Pindiga went ahead to deliver controversial verdicts, validating all the legislative results called by the Independent National Electoral Commission (INEC) in the state.

“The truth is that Justice Pindiga tainted the image of the judiciary with his rulings,” said a lawyer who represented one of the candidates who petitioned the tribunal to overturn a controversial election into the House of Representatives. “We all know that the PDP [Peoples Democratic Party] carried out massive rigging throughout Rivers [State]. So when Justice Pindiga’s tribunal upheld all the cases brought before him, he robbed the people of Rivers the opportunity to redress the injustice done against them by men and women who fraudulently got into office using widespread rigging and violence,” said the lawyer.


Justice Mohammed Suleiman Ambrosa, who took over the governorship tribunal, reportedly rebuffed every effort by Mr. Wike and his cohorts to bribe him and members of his tribunal, perhaps for fear of being exposed as his successor, Justice Pindiga, was.

Below is the text of our original reporting on the firing of Justice Pindiga:

Justice Mu’azu Pindiga, chairman of the Rivers State governorship election tribunal, was removed after investigators from the Department of State Security (DSS) discovered that the judge had accepted a bribe of N200 million from Governor Nyesom Wike, the major defendant in an electoral case before the tribunal.

Our sources within the DSS said their agents confronted the judge as well as the President of the Court of Appeal, Justice Zainab Bulkachuwa, with evidence of the bribe. Justice Bulkachuwa then decided to remove the tribunal chairman.

Justice Mohammed Ambrosa was then asked to replace the compromised Justice Pindiga, as the President of the Court of Appeal said there was no point swearing in a new judge.

Two lawyers representing clients whose petitions were before the electoral tribunal told SaharaReporters that they welcomed the firing of Justice Pindiga. “Apart from the fact that he has been exposed for being corrupt, he has not demonstrated any knowledge of electoral matters,” one of the lawyers said. “I can tell you that a number of lawyers who have appeared before him have found him wanting when it comes to issues pertaining to the electoral laws of this country,” he added. Another lawyer echoed the sentiment. “We had protested to the President of Court of Appeal to replace the judge. He was a poor judge,” he said. After learning about the replacement of Justice Pindiga, Mr. Wike’s lawyers launched a feeble protest, criticizing the reconstitution of the tribunal. However, their protest was silenced when they were told that the governor’s bribe to the removed judge had been exposed.

Governor Wike had made at least two attempts to see the Chief Justice of Nigeria to seek the CJN’s help to influence the outcome of the tribunal, but the nation’s top judge declined to meet with the governor, citing his fear of President Muhammadu Buhari. SaharaReporters learned that Mr. Wike’s lawyers facilitated the collection of the N200 million by the ousted tribunal chairman. Justice Bulkachuwa, who oversees the Court of Appeal, is mentioned in legal circles as a keen receiver of inducement in past electoral tribunal cases.