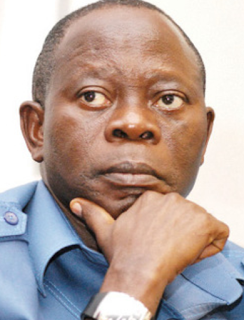 Adams Oshiomhole of Edo State, yesterday, disagreed with other governors of the country on the ability of the states to pay the N18,000 minimum wage, saying they must pay. Recalling that the minimum wage was agreed between the Federal Government and the organised labour by the previous administration,

Oshiomhole told the governors and other elected political office holders that democracy cannot be run at their comfort and convenience Oshiomhole spoke as the leader of the Northern Elders’ Forum, Prof Ango Abdullahi, blasted governors for claiming that they are broke and can no longer pay workers the minimum wage and as factional presidents of the Nigeria Labour Congress, NLC,

Comrades Ayuba Wabba and Joe Ajaero,yesterday, attended the first Central Working Committee ,CWC, meeting organised by labour veterans and stakeholders to resolve the crisis that brought division among labour leaders after its election about six months ago.

Democracy can’t be run at govs, others’ comfort Speaking at the meeting held at the Labour House, Abuja, Governor Oshiomhole said nobody would question the wisdom behind the payment of minimum wage to workers in the country as it was not imposed on the government, rather it was a product of agreement between government and labour.

His words “I am a labour man, I have been clear with my colleagues in seeking to find solution to the problem we face. We have to be holistic, we cannot at one hand question the wisdom behind the national minimum wage. I joined the NLC to protest to the National Assembly when they were going to amend the constitution to make the minimum wage a concurrent issue.

“I believe that the issue in the economy hasn’t got to do with minimum wage. I have always also reminded my colleagues that the minimum wage was not imposed, it was negotiated and state governments agreed to it, the president signed it not under duress, there was no strike to compel the then president to sign it, he signed it voluntarily.
on November 21, 2015