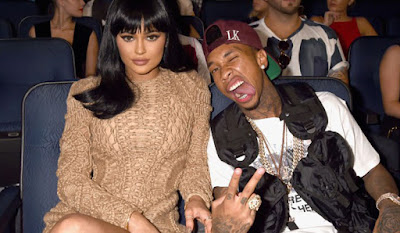 There have been speculations that the much talked about relationship between Rapper Tyga and Kylie Jenner, the youngest of the Kardashian sisters has finally hit the rocks.

Kylie  was said to have been absent form Tyga's birthday neither did she send birthday wishes via her social media platform as it is typical of the Kardashians. Non of her family members sent the singer birthday wishes, not even her "mommager" who once approved of their relationship.

The rapper yesterday had a birthday dinner in Hollywood and some of his famous friends which includes Jamie Foxx, Leonardo Di Caprio, Asap Rocky and Wiz Khalifa amongst others turned up for him.


To further fuel the speculations, her sister Kendal posted a picture on her page giving someone a middle finger (you should know what that means) LOL.
on November 21, 2015