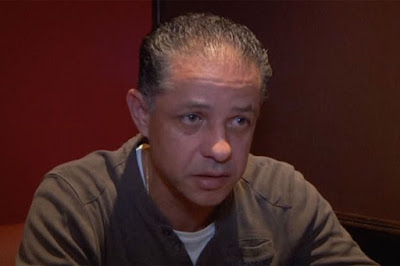 A nurse who gave CPR to a wounded man sprawled in the wreckage of a bombed cafe has spoken of his horror when he realised the patient he was trying to save was a suicide bomber. David, 46, was among the brave healthcare professionals who rushed to the centre of Paris last week when the terrorists opened fire on the audience at the Bataclan theatre and detonated bombs at the Stade de France.

He said He was unconscious, he had nothing special, but I noticed that on the side of his body there was an enormous hole. A large hole on his side. But there, again, I don't think at all that it was a suicide bomber.At that moment, for me it's a client like others who suffered from a gas blast and who must have hurt himself on something. But his wound was huge.

" It was only when he took the man's T-shirt off to better try and resuscitate him that he noticed the wires snaking around his body.


"I put him on the ground, I start performing a CPR, the other guy who was with me takes over from me. And at that point we had just unbuttoned the jacket, that's all, we had kept his T-shirt on, it was not really thick One of the now dead Paris attckers When I was performing the CPR I did not feel anything. And at some point, the guy performing the resuscitation with me tells me 'maybe we should remove the T-shirt, it's better.' I tell him 'yes, you are right'.And when I ripped his T-shirt I saw some wires.

"On the ground there was blood, and I noticed the first bolts on the ground. Then I understood immediately. I told myself, 'it's an explosion (that made the wound in his side), it's a suicide bomber' and I knew it was him. And at that precise moment when I realised what he was, the emergency services arrived." The bewildered nurse said:

"I knew, I knew that he was dead but I told myself: "if there is a chance, why not? But without thinking it was him I that had done. "At the moment I realised it was a suicide bomber, the emergency services and I did not have to deal with him anymore. I tried to assess what the damage was. It was when I told to the fireman that had recognised me

"this man has lots of wires on him", he screamed, he said: "Everyone get away, we evacuate everyone. And then we all went outside." If it was not for the fact that the bomb was damaged and had not exploded properly, David's kind actions could have cost him his life. He said:

"I am told (the next day), that yes he was the suicide bomber, he did blow himself up. he told me I was very lucky as they said on TV that his bomb did not explode like it should have done. Otherwise he would have caused much more damage.

"It was Sunday afternoon that I realised that by installing him on the ground, by performing a CPR - I performed some pretty rough actions - I could have got killed too. Completely. I think about it, I still think about it."