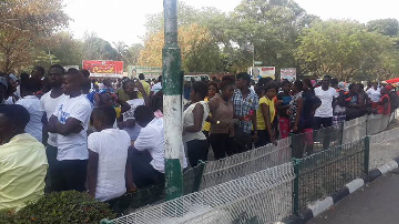 Youths who were billed to participate in this year’s Benue State carnival have hit the streets in protest of the cancellation of the event.

Hundreds of youths hit the streets blocking all entrances to the Government House in demand for an explanation for the abrupt decision after they had been rehearsing for over three weeks for the event.

Speaking on the matter, one of the participants lamented the insensitivity of the government towards the youths saying they had put in a lot into preparation for the carnival only to have their hopes bashed on the very day the procession was scheduled to hold.

“Training had begun in the 2nd week of December and we were told all was in order even up till yesterday. Today we came only to be informed that the carnival would not hold. Most participants come from as far as Kanshio, Adaka, Gaadi, Airforce etc spending transportation fare only to meet this sorrow.”

Meanwhile, the state government has appealed for calm saying there was a breach of communication between the government and the organisers of the carnival which made them unaware of the latest development. Governor Samuel Ortom, represented by Attorney General, Barr. Mike Gusa while addressing the youths, explained that even though he was not aware, he had contacted the organisers and will do everything to solve the problem.

He said. Also present at the scene were the Principal Private Secretary, Stephen S. Amase; Special Adviser on Media and ICT, Tahav Agerzua and SSA Special Duties, Abraham Kwaghngu. Unofficial sources report that a sum of N3 million Naira was released for the compensation of the angry youths.
on December 30, 2015