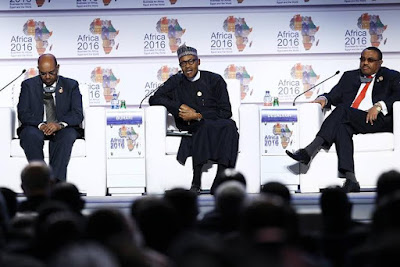 Despite many Nigerians clamoring for the Naira to be devalued, President Buhari has insisted he wont. he made this known while speaking at the just concluded Business for Africa, Egypt and the World Forum held in Egypt yesterday February 20th.

President Buhari reiterated his stance against the devaluation of the Naira

"Developed countries are competing among themselves and when they devalue they compete better and manufacture and export more. But we are not competing and exporting but importing everything including toothpicks. So, why should we devalue our currency?.
We want to be more productive and self-sufficient in food and other basic things such as clothing. For our government, we like to encourage local production and efficiency.”he said.

He added that those who have developed taste for foreign luxury goods should continue to pay for them rather pressure government to devalue the Naira
on February 21, 2016