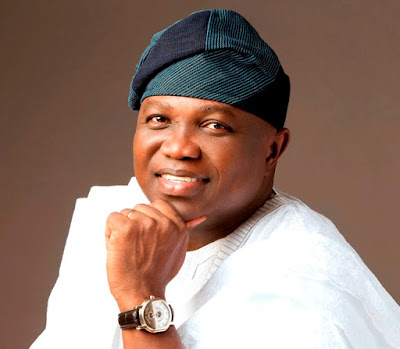 Governor Ambode who made the declaration when the management of the company led by the Group Managing Director, Mr. Tunde Folawiyo paid him a courtesy visit at the Lagos House, Ikeja, commended the firm for their doggedness to achieve the feat after 25 years of hard work, saying that by the provision of Section 162 Sub-Section 2 of the Nigeria Constitution, Lagos has become an oil producing State.


He declared, “I want to thank you very much for this and I say it with all conviction because I know that based on section 162 Sub-Section 2 of the Nigeria Constitution, Lagos becomes an oil producing state and by virtue of this, the 13 percent derivation that is due to oil producing states, Lagos will start to partake from it by your very good gesture. So we officially declare Lagos State as an oil producing state, we also notify the Federal Government by this action that we would be sharing out of the 13 percent derivation. So all we need do is to apply and then we join.”

Governor Ambode also said that the feat has not only placed Lagos in the history books as the first state outside the Niger Delta to become an oil producing State, but has also opened up a new page for revenue generation in the State.

“It also means that by the additional revenue that is coming from this action, we would have more resources to provide infrastructure for Lagosians and this is what we want other investors and businessmen to emulate, so that beyond the issue of profit, you are actually creating impact on people without them necessarily knowing that it is actually coming from a venture like this that you have embarked on,” he said.

He said the resilience of the Tunde Folawiyo Petroleum Company, an indigenous firm has shown the possibilities and opportunities for investors and businessmen willing to commit their resources to boost local production. “I want to commend what you have done, it’s a sign that you believe so much in Lagos State. I want to congratulate you, I want to showcase you as a very good example of a dogged entrepreneur, as someone who believes in Nigeria because that’s what you epitomize here.

“The Federal Government has always said that we all need to look back inwards and start to do things for ourselves. Spending 25 years to be able to get to this stage and get something productive shows a lot about your belief, tenacity and doggedness and I want to recommend you to every other Nigerian investor that there is still greater hope for Nigeria and with the likes of you, I don’t see any reason why any Nigerian needs to be afraid because you have just shown by this indigenous discovery that anything is possible in Nigeria.

“This discovery is by a 100 per cent indigenous firm and at times like this when we are experiencing dwindling revenue from different areas of our economy; at times like this when foreign exchange is highly turbulent, it gives one great hope that the future prosperity of Nigeria is assured and is secured by transactions like this,” Governor Ambode said.

Governor Ambode said that what the historic discovery means for Lagos is that the three Senatorial Districts, Lagos West, Lagos East and Lagos Central have all combined to open up the economic and investment potentials of the State.

“We are likely to have three Sea Ports in Lagos in another two years; we have the Badagry Deep Sea Port and the Lekki Port and also the Apapa port. So, somehow, in some manner, some things are being put up that seems like a puzzle, but the future prosperity of Lagos is more than well assured and we are happy that we are part of that and this government is heavily committed to complement the efforts of business men like you.

“In supporting endeavours like this, we would do everything to support whatever it is you want us to do to make sure that the arrow head of this particular sector that you have championed will not just go in vain. I can assure you of that,” the Governor said.

Earlier, Mr. Folawiyo said that the discovery of crude oil in Lagos, which has taken over 25 years to achieve, has gone a long way to show the possibilities achievable if Government continues to lend support to indigenous investors and companies.

“At so many points along the way, we could have given up because it was a very rough road, but the point is that only a Nigerian company would have continued to do what we did. The man crux is that we need government and government needs us and where government supports assiduously, it can only be success,” he said.

Asked how much has gone into the investment, Folawiyo said the company has committed about $400million dollars to achieve the feat. He said the current status of the oil well has the capacity to produce at least 12,000 barrels per day, with a possibility to increase to 25,000 to 50,000 barrels per day in the nearest future.

Folawiyo also presented Governor Ambode with a sample of the crude oil discovered by his company in the State, a confirmation of Lagos becoming the first basin out of the Niger Delta to become an oil producing state, which according to him, is by no means a small feat.