Man Kills His Wife Over Allegations of Infidelity in Lagos (Photos) 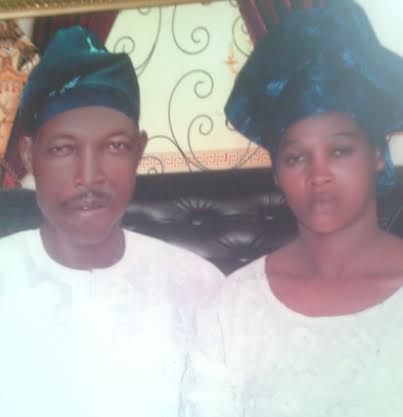 The Lagos state police command have arrested Sogei Jafairu, a native of Etsako Central Local Government Area of Edo state for allegedly killing his wife, Roselyn, over accusations of infidelity, at their home in Araromi Street in Oshodi area of Lagos yesterday May 27th.

According to Vanguard, Jafairu had traveled out of the state for a week and only returned home on Thursday May 26th. His wife Roselyn prepared food for them to eat which he allegedly poisoned.

“My daddy and mummy never ate together since I grew up knowing them as my parents. We only saw them eating together for the very first time yesterday (Thursday) .Mummy came back from the market with some drinks she said we would use to celebrate Children’s Day today (yesterday). We were surprised when we saw them eating beans and garri from same plate but concluded that it could be as a result of my kid sister’s birthday that was celebrated same day.We all went to bed without any thought of the unexpected. But at 3am my daddy woke me up and instructed me to go and meet my mum in the bedroom. I left the sitting room where I slept with my aunt and three siblings. As I was going to urinate, I saw daddy vomiting in the bathroom. I went outside to urinate and when I came back, I saw him lying down in the bathroom. When I flashed the torchlight, I noticed that he was vomiting some black substance. He also excreted on himself. Out of fear, I rushed to wake my aunt up to assist daddy. I also told her to wake mummy up to come and help daddy but she said that mummy was not responding. When I went inside and flashed my torchlight at her, I saw that the bed she laid on was socked with blood. On closer observation, I discovered a deep cut on her throat and passed out. Daddy initially said somebody broke into the room and killed mummy but we discovered that the gate was locked. Later he said I was the one that killed my mummy. How can I kill a mother that has been playing the role of a father to us?. She was even sponsoring my elder brother, Collins who just gained admission into the University. She was the bread winner. Twice, we have been sent packing by our landlords at Michael and Banjoko streets because daddy could not pay the rent. Why would anyone think of killing such person? “, he asked, crying.

A relative of the deceased, Feronica Imomoh, revealed that Jafairu had previously accused his wife of cheating on him.

“Our family had warned him to stop beating my sister . He does not have any job, she was the one feeding him and paying the rent. Anytime she collected gifts from her relatives, he would quarrel with her, accusing her of sleeping with men. There was a time he took him to our village in Edo State to swear before a shrine that she was not cheating on him. Just yesterday (Thursday) he demanded N10, 000 from her. She promised to raise the money by borrowing from her friends”.

Confirming the incident, the Deputy Spokesperson for the Lagos State Police Command, Chukwuma Ozoani said:”It was a murder case and the husband was suspected to be under the influence of drug. The case has been transferred to the SCID and investigation has commenced.”
on May 28, 2016