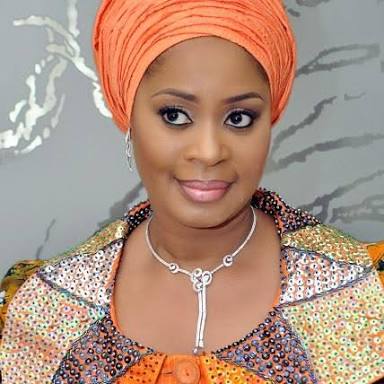 Wife of the Ogun State Governor, Mrs Olufunsho Amosun has narrated how she converted from Christianity to Islam after her marriage to the governor, Senator Ibikunle Amosun.

She explained why as a staunch Christian with a bishop as a father, she is married to a Muslim.


In an interview with Vanguard, she said “The first person I told I wanted to get married to a Muslim was my mother. First, she burst into tears and then she asked me whether I had told my dad and I said no and I could see that mischievous smile.

But, today, my mother and my husband are like the best of friends and, of course, I get my pound of flesh back sometimes when they are joking and she has forgotten! I will say, ‘Eh! Muslim lo fe fe’ (meaning, you want to marry a Muslim). .

“When I told my dad, he said, ‘Ah, okay, well, we just have to pray about this one’. But somehow, they hit it off very well. The thing about it is, my husband believes in God. My husband, I will say, is even more religious than me. “He truly believes in God, he has faith in God that all things are possible and when you see somebody that is so committed and you see that based on his faith; not challenging God, but telling God that ‘I believe in you’ and you see time and time and time again those things manifesting.

"It started from me having faith in his faith. I have faith in his faith, God and that just made it so easy, because I could see that God did not fail him and I know that my husband doesn’t believe in anything else, except God.” .

When asked if there was any deliberate attempt from her husband to convert her to Islam, she said, “Not really. But yes! “I pray the Muslim way because we are a very close-knit family and, in the beginning, I will tell my children, ‘Oya, time to pray’. ‘But mummy how come you are not praying with us?’ ‘Does that mean daddy’s God is not a good God?’ My children will ask me. And that was when I began to give it a thought. It didn’t take much time before I joined them. The rest, as they say, is history but it was not his doing, I just converted, just like that,” Mrs Amosun stated.
on May 16, 2016