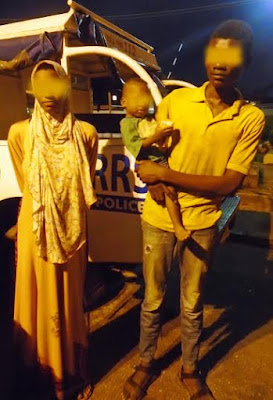 The operatives of Rapid Response Squad (RRS) yesterday, evening prevented a mother of four from committing suicide by jumping into the Lagoon with a 12 – month old baby.

The lady, Halimat Adegoke (not real name), 27, was restrained by two Response riders from plunging into the Lagoon from the top of the Third Mainland Bridge.


A cab driver had drawn the attention of the RRS riders on routine patrol of the area to Mrs Adegoke, who was carrying a 12 – month old baby at about past 5:00 p.m. when the incidence occurred. On interrogation at the RRS HQ, Adegoke noted that she trekked from Medina Estate in Gbagada to the Third Mainland.

She noted that she heard a voice calling out to her to come to the Third Mainland Bridge. She pointed out that she decided to harken to the call because it was repeated and constant call out to her.

Adegoke, a Unilag drop out, told RRS interrogator that before the incidence, she had issues with her husband before relocating to her parent’s house in Gbagada, Lagos.

The lady along with her baby have been released to her relatives this morning.
on May 18, 2016