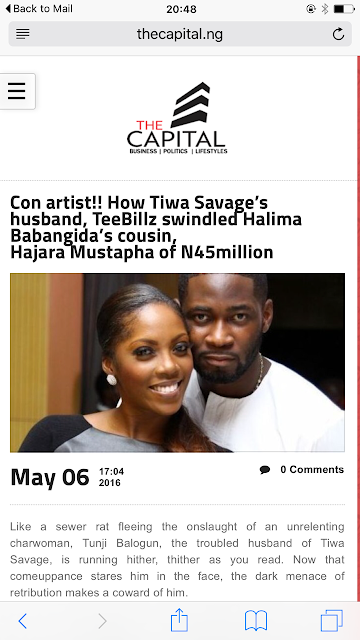 Like a sewer rat fleeing the onslaught of an unrelenting charwoman, Tunji Balogun, the troubled husband of Tiwa Savage, is running hither, thither as you read.

Now that comeuppance stares him in the face, the dark menace of retribution makes a coward of him. There is no gainsaying the uncanny resemblance between him and the lead character of Anezi Okoro’s famous novel, One Week, One Trouble. Like the 1972 novel’s character, the dark-hued dude has been hugging negative spokes of the limelight in the past few days. Consequently, many are beginning to wonder whether he was the same self-effacing, promising dude they had always known. From allegations of advance-fee fraud to marital infidelity, TeeBillz excites malicious gossip in his wake more often than you could count. 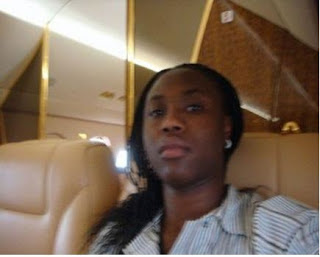 
Adultery for instance, is a prison-house for TeeBillz – his lust for it however, accentuates its tragic manifestations on his psyche. It’s like a medieval dungeon built in an arena of flickering flames that scorches the body and scalds the eyes. In the heated pit, flames of desire and untamable wiles flare all around Tunji hence manifesting as one great furnace to him and his marriage.

Flames flare around this great furnace yet and from those flames, there is no light, just interminable darkness and moonshine that serves only to discover sights of sorrow and feelings of woe. Very sad!

You couldn’t have forgotten so soon that Tiwa mentioned it in her interview that Tunji collected N45 million from someone and they are currently after him. TheCapital investigations revealed that Tunji actually collected the money from the last daughter of General Ibrahim Babangida, Halima Babangida’s cousin, Hajara Mustapha, .

According to an insider, the poor girl who was apparently ignorant of his penchant for mischief, gave N45 million to him on behalf of Etisalat for a show. Immediately he collected the money, he had a rapid dialogue with his legs. He absconded.

We gathered that Halima informed her cousin, Halima and they are threatening fire and brimstone, even as you read, to get the money from Tunji. They have informed EFCC to go after him. Now, he has been running from pillar to post, burrowing like heat-maddened rabbit, from one hutch to the other, in search of a miraculous lifeline and refuge from the reach of the EFCC.‎ .

However, as the walls of Karma close in on him, TeeBillz has started thrashing about like a bison drowning in a quicksand of wrath and its own stench. He has stopped clutching at straws in the air to sink his nails, like talons, in the hide of perceived detractors. TeeBillz sinks with his bulk deeper in the marsh of charges levelled against him by his wife and benefactor, Tiwa, every minute.

All efforts made to reach him for his side of the story met with a brick wall.