Boko Haram Member Who Disguised As Woman Was A Nigerian Soldier 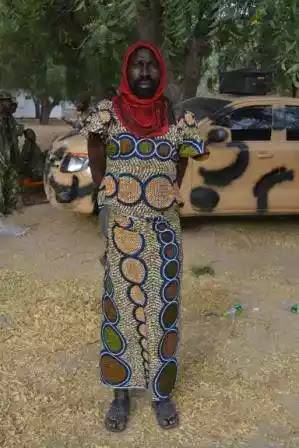 According to a new report by Sahara Reporters, an Alleged Boko Haram Member who disguised as a woman used to be a soldier with the Nigerian Army. Several months ago, as associates of former President Goodluck Jonathan pushed the Independent National Electoral Commission (INEC) to postpone the 2015 general elections, a video was released of an alleged Islamist terrorist caught in a woman’s dress.

However, a video obtained by our correspondent revealed that the man presented to the Nigerian public as a Boko Haram insurgent is an enlisted Nigerian soldier serving at the time as a member of a multinational military task force operating in Nigeria’s northeast. In making a case for postponing the presidential election that had been scheduled for February 14, 2015, Mr. Jonathan’s National Security Adviser, Colonel Sambo Dasuki (rtd), had claimed that Nigeria needed to launch an offensive to dislodge Boko Haram from the northeast and end insurgency.


Shortly before and after the elections were postponed, Nigerian troops ramped up the fight against Boko Haram, liberating areas hitherto captured by the insurgents. The troops released photos of weapons it claimed to have seized from the insurgents. However, some of the photos bore timestamps indicating the shots were taken as far back as 2011. In an intriguing twist just uncovered by our correspondent, the remarkable photo and account of a man disguised as a woman has been exposed as a ruse as well. The military had claimed that the man was an insurgent captured after a fierce operation led by the Nigerian Air Force.
on August 26, 2015