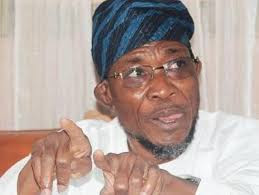 Osun State Governor, Mr. Rauf Aregbesola, has declared war against PUNCH newspapers for reporting the views of opposition parties on the happenings in state. The governor, in a video clip, watched by our correspondent in Osogbo on Tuesday, made the public declaration of war against PUNCH and Tribune newspapers on September 8 during the commencement of distribution of plastic chairs and desks to schools in the state.

The ceremony was held at the premises of Adenle Middle School, Osogbo, the state capital. Making reference to media reports of several months of unpaid salaries in the state, the governor said PUNCH and other newspapers supported his adversaries to lie against his government. He said, “They didn’t spare us on any platform. Even today, they lied against us and some shameless organs of mass communication supported them. “Say shame on them, shame! All of them and those who are supporting them. Some newspapers knew they were lying, yet they supported them.


PUNCH reported last week Thursday that they had just released the money. The same PUNCH published today that we have kept the money for two months. Shame on all of them, shame! “Newspapers are meant to educate the people, they are not meant to incite the public against the government. Shame on PUNCH, shame on Tribune. I say it openly; let them challenge me. “PUNCH newspaper, Tribune newspapers have declared war on our state and we shall not spare them, we shall not spare them, it’s war! “You can’t be attacking us and expect us to be quiet; we shall fight back. The time has come for us to fight back; we will fight back.”

There has been a persistent attack against PUNCH by some former aides of Aregbesola and their supporters on the social media. One Adeyokunnu Taiwo wrote in her comment on the attack on the newspaper by a former state Commissioner for Special Duties, Bashiru Ajibola, on the latter’s Facebook wall, “PUNCH should be visited by the ‘State Boys’.” Based on verbal attacks and other forms of threats by the governors supporters against the PUNCH correspondent in Osun State, the corespondent had written a petition to the Commissioner of Police, asking the police to investigate the threats and to stop Aregbesola from further inciting his supporters against the media organisation.
The same petition was also forwarded to the State Director, Department of State Services, asking the DSS to probe the threats. The petition read in part, “I wish to inform you of the threats to my life from supporters of Governor Rauf Aregbesola and those of his political party, the All Progressives Congress in Osun State. “A female supporters of the APC, Adeyokunnu Taiwo, who commented on a disparaging comment made against PUNCH by a former Commissioner for Special Duties, Mr. Bashiru Ajibola, on Facebook, said, “PUNCH should be visited by State Boys. “I know for sure that the police in Osun State are aware of the existence of State Boys and what they are capable of doing. I have started noticing some strange faces around my office and I feel I have to report the threats they pose to me to the appropriate quarters for investigations.”
on September 22, 2015