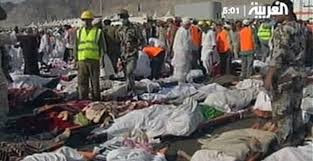 Nigeria now records the third highest death toll in the stampede that claims the lives of hundreds of pilgrims and injured even more in Saudi Arabia.

With the confirmation of the death of 64 pilgrims by the Nigerian Hajj Commission, an even more grim submission by the Commission points out that about 244 pilgrims still remain unaccounted for, which could mean that the death toll could rise even further.

Below is the breakdown of the casualty figures of each country: