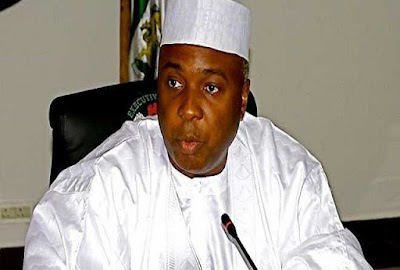 Nigerian workers, under the umbrellas of the Nigerian Labour Congress and the Trade Union Congress, have asked the President of the Senate, Senator Bukola Saraki, to vacate his office pending the determination of his case at the Code of Conduct Tribunal.

The workers, who spoke across the country, said although Saraki is still on trial and has not been found guilty of the allegations against him, it is morally right for him to vacate his office as Senate President to defend himself.

The Office of the Attorney General of the Federation is prosecuting Saraki for alleged false declaration of his assets at the Code of Conduct Bureau. Saraki had, last Tuesday, stepped into the dock at the CCT in Abuja, where he was arraigned for false assets declaration charges. He pleaded not guilty to all the 13 charges slammed on him by the CCB and his trial has been scheduled to hold on October 21, 22 and 23.

Leaders of the NLC and the TUC said it had become necessary for Saraki to step aside from Senate presidency to answer the charges leveled against him. Organised labour had on, September 10, 2015, held nationwide protests against corruption, while seeking death penalty for public treasury looters. Labour said it was only by killing looters that the anti-corruption crusade being championed by President Muhammadu Buhari could succeed.

President of the TUC, Mr. Bobboi Bala, in an interview with a Punch correspondents, said Saraki has a moral burden to resign. He said,

“Resignation is a moral burden on people. But if somebody feels that he will carry his cross, go to the courts and try to exonerate himself, he should be given the opportunity. But it would be too bad if at the end of the day, he is found guilty. It does not speak well of public office holders.

“In other climes, as soon as such things happen, people tender their letters of resignation. Obviously, it is a moral burden on him. We hope all politicians will begin to know that no matter how highly placed they are, one day, they will definitely have to account for their stewardship.”

Several chapters of the NLC and the TUC across the states also asked for Saraki’s resignation on Saturday. The Chairman, TUC, Ogun State, Mr. Olubunmi Fajobi, told one of our correspondents that if it were in a civilised clime, the Senate President would have stepped aside to allow for free and fair trial. He said, “As it were, the Senate President is sitting on a delicate seat. If it were a civilised society, he would have stepped aside to allow for a fair trial, so that he won’t allow his official position to influence the decision of the tribunal.”
on September 27, 2015