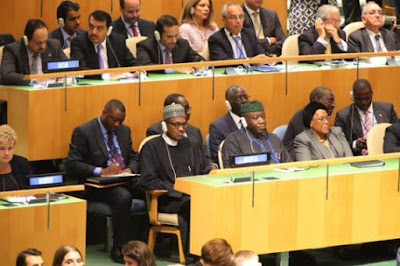 The president was said to be accompanied only by 21 delegates, Governors of Kaduna, Niger and Cross River states. Also on his entourage are former governors Rotimi Amaechi and Kayode Fayemi, senator from Katsina, Hadi Sirika and a former member of the House of Representatives, Abike Dabiri, are also in the delegation.

The immediate past president Goodluck Jonathan in 2013 was said to have been accompanied by over 600 people to New York. However, the presidency scrambled a denial, saying those who traveled officially with the president were less than 30. For his first visit to the General Assembly as elected president, Buhari reportedly received meeting requests from about 21 world leaders, but he will only be able to meet some of them. Buhari is expected to return to Nigeria on October 1.