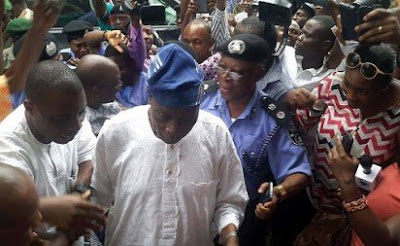 Chief Olu Falae had earlier opened up on his recent kidnap and release. He revealed that the police wasn't actively involved as they made it seem, saying that his family paid a ransom and the IGP lied. If you missed it, read it here. Well, the police have reacted with their own side of the story.
The office of the Inspector-General of Police has been inundated with enquiries on claims by Chief Olu Falae and his family that a ransom was paid to his abductors following the kidnapping incident involving him on 21st September, 2015 and eventual release on 24th September, 2015.
As a law enforcement agency guided by rule of law and professional ethics we do not under any circumstance encourage the payment of ransom to kidnappers or other criminals as it is tantamount to rewarding crime and motivating other criminals to follow that path.
As such, the Police was not in any way privy to any arrangement that would have led to payment of ransom by the elder statesman or his family. For the respected Chief to declare that he paid a ransom for his release is therefore, a demotivating news.

Our approach was a professional response to what we saw as a crime against a respected national personality known to embrace peace and who has dedicated most of his valuable life to selfless service of our Nation.

The Police under the leadership of the Inspector-General of Police deployed our unique intelligence and operational capabilities including Police helicopters for aerial surveillance. Our intelligence and operational teams comprising Intelligence Response Team (a special anti-kidnapping unit), Conventional and Mobile Policemen were deployed for rescue operation. They followed the path from the point of kidnapping at his farm at Ilado, along Igbatoro Road in Akure, Ondo State and trailed the hoodlums through bushes to Owo in Ondo State. In the process, we were able to identify the major actors and currently high level Police activities are being emplaced to apprehend and bring them to justice.

As professionals, it is our conviction that the unprecedented and massive deployment of Police resources and men to support search and rescue operations put pressure on the criminals to release the elder statesman. This is much so, that history has shown that even where ransom is proven to have been paid the life or safe return of a kidnap victim may not be guaranteed. The primary interest of the Police in this instance and granted the circumstances of the incident), was the safe rescue of Chief Olu Falae which was achieved.

Whatever the family did as regards payment of ransom was outside the knowledge and consent of the Police and at this point we wish to advice that in future families who fall victims of such acts should rather work closely with the Police component of the rescue initiative so that we can achieve the primary purpose of rescuing the victim alive instead of wittingly or unwittingly giving the impression of encouraging criminal activity by rewarding criminals with payment of ransom.

In this instance, having confirmed that ransom was paid to the abductors, the Police will be interested in widening their investigative scope with a view to exploring the lead further with regards to how payment was made and to whom such payment was made.

If the payment was perfected through bank transaction the Police have the capacity to track such transactions and will be liaising with the bank to enable us trace the cash and apprehend the perpetrators. This could be an added lead that could strengthen ongoing post-kidnapping efforts of the Police.

The Inspector-General of Police wishes to reassure Nigerians of his determination to strengthening and enhancing the safety and security of its citizens while counting in Nigerians to continue to support and work in strong synergy with the Police towards the achievement of our statutory mandate.
on September 29, 2015