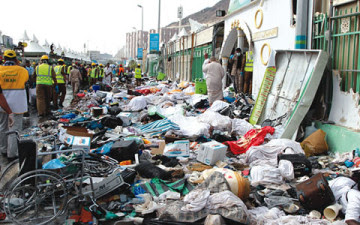 As more names of the victims of Mecca Pilgrimage tragedy is being released, the Sokoto State Pilgrims Welfare Agency has confirmed the death of the immediate Caretaker Chairman of Illela Local Government Area of the state, Alhaji Bello Gidan-Hamma, his mother, stepmother and two wives in the stampede in Mina, Saudi Arabia.
The agency also confirmed that the Chief Imam of the Sultan Abubakar III Jumaa’at Mosque, Sokoto, Sheikh Liman Dan-Ata, was among those killed in the stampede. The Media Assistant to the agency, Alhaji Farouk Umar, made this known in an interview with the News Agency of Nigeria on Sunday.
It will be  recalled that the state government had in a statement issued on Saturday by Governor Aminu Tambuwal’s spokesperson, Imam Imam, confirmed the killing of nine other pilgrims from the state in the Mina stampede. Several pilgrims from the state had also been declared missing.

Meanwhile, the Sultan of Sokoto, Alhaji Sa’ad Abubakar lll-led Jama’atu Nasril Islam on Sunday urged the Saudi Arabian authorities to probe the stampede. “This is one tragedy too many,” the JNI in a statement by its Secretary-General, Dr. Khalid Abubakar-Aliyu, in Kaduna, on Sunday, said. This is just as a fiery Islamic cleric and leader of the Shiite Movement in Nigeria, Shiekh Ibaheem El-Zakzaky, blamed the tragedy on a Saudi prince whose convoy allegedly caused the stampede. He said the prince and others fingered in the tragedy should be sentenced to death.
on September 29, 2015