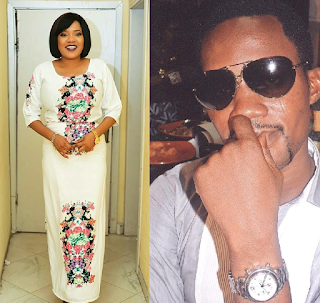 The crisis rocking the home of Nollywood couple, Toyin Aimakhu and Adeniyi Johnson seem to be brewing more shocking surprises.

The sultry actress who was awfully jilted by her husband Niyi Johnson on account of incessant extra marital affairs seems to have had enough. seunegbegbe Reports reaching bestofNollywood.tv on the current state of the tiff rocking the home of the Nollywood stars has it that Toyin seems to be through with the marriage for good as she is currently romancing Lagos big boy and CEO of Ebony films Seun Egbegbe.

Reports have it that the new lovers recently flew to UAE’s most populous city; Dubai to cool off. Niyi on the other hand has been left to leak his wound.

Few weeks ago the actor openly confessed on his instagram page to being guilty of extra marital affair, he was caught by his wife cheating. When BestOfNollywood.tv put a call through to Niyi to confirm the state of things with his wife, he said “I don’t have much to say, my wife and I are fine. Period”.


When Toyin was contacted, she asserts “I do appreciate your call but right now i don’t want to say anything about this. When I’m ready to make a statement, be rest assured you will be contacted.” On her relationship with Seun Egbegbe, she insisted, “I still insist. I’m not saying anything for now. When I’m ready to talk, my PR person will contact you.”

Seun Egbegbe on the other hand cleared the air on why Toyin Aimakhu was in Dubai with him recently; “Toyin Aimakhu is just my friend. I had an event at Four Point Hotel in Dubai on the 17th and 19th of September, Toyin Aimakhu and Kunle Afod were the host of the show.Taiye Currency was the Fuji Artist that performed for me at the show. That was the reason she was in Dubai. Nothing more”

BestofNollywood.tv reliably gathered that among several escapades of Niyi, on an occasion his wife had caught him cheating with a girl he had met and exchanged contact with at the Mall. The last straw that broke the camel’s back was when Toyin was reported to have caught her husband with one of her domestic staffs doing ‘Bad tin’.