Woman Arrested For Attempting To Use Twins For Fraud 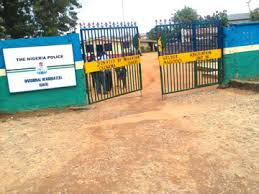 Police operatives attached to Pen Cinema police station in Agege, Lagos, on Sunday arrested a woman for trying to use twins belonging to Mrs. Ruth Uche for fraud.

The woman was nabbed at College Road Estate, after she took the four- month old babies to a retired police commissioner’s house, claiming they were his grandchildren. The Nation gathered that the suspect, a mother of two, identified as Victoria, was introduced to the Uches by one of their neighbours. She was said to have deceived the children’s parents that she wanted them to appear in a film. Although Ruth’s husband, Emeka Uche, was said to have declined initially, he eventually consented to her request on the condition that his wife must go along with the children. But rather than taking them for the film shooting as claimed, she reportedly carried them to the big man’s house, who was overjoyed when he saw the children. Trouble, however, started after the suspect could not state the actual sex and age of the babies.

Victoria, who had earlier taken pictures of the twins and sent to the man, had told him they were boys and two months old. But when the retired commissioner eventually saw the babies, he realised they were a boy and girl, and looked much older than two months. It was at that point that Mrs. Uche suspected something was amiss and told the man the babies’ actual age and sex. “I did not understand what was going on. I do not even know the place we went to. She has been pleading with us that she wanted to use the twins (youngest set) in a film.


“My husband initially declined the proposal, but he later changed his mind since the woman said she wanted the children to act in a film. I begged my husband and he said he will only agree on the condition that I go with the woman. “So, around 11:30am on Sunday, we all left the house and came to Agege. She took us to one big man’s house. I do not know the place and she told me to sit down that it is the kids that will act the film. “But when I sat down, I heard the man asking her whether the children are two boys and how old they are. “She said two months and that they are boys. But I told the man that they are a boy and girl, and that they are four months old. “The man asked whose children and I told him they are my children, that the woman said she wanted to act film with them.

“That was when the man started shouting, saying that she told him that my children are his grandchildren. The man said she has sent their picture before, saying his son impregnated a woman before travelling abroad. “The man now said that we were in it together and that I knew about it. I told him I do not know anything that the only thing she told us was that she wanted to act film with my babies. “Before she did not want to talk, but when people threatened her, she told them that I am innocent. The woman told them she wanted to get money from the man. That woman is a criminal,” Mrs. Uche said.
on September 28, 2015