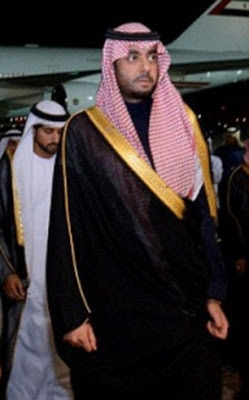 Remember the Saudi Arabian Prince who was arrested last month after neighbors spotted a crying, bleeding woman attempting to scale a wall of his Beverly Hills mansion compound?

Prince Majed bin Abdullah bin Abdulaziz Al Saud, 29, was initially charged with battery and forced oral sex, but now those charges have been dropped, and instead, three women who were part of his domestic staff have come out to lay fresh and scandalous charges against him.

They say he ordered his entire household to gather by the pool and strip off because he wanted to see 'some naked pus*y'. .He is also accused of failing to prevent aides from mistreating three female members of his domestic staff – with the result that they now also face charges, although Prince Majed remains the lead defendant.

The women, who all allege sexual harassment and say they were imprisoned at the mansion against their will, have filed a civil claim – seen by Daily Mail Online – against the prince. Prince Majed, one of the late Saudi monarch King Abdullah's 35 children, was initially charged with battery and one count of 'forced oral copulation' and bailed for $300,000 by the LAPD.

However, on Monday the Los Angeles District Attorney's office announced that felony charges had been dropped, with the case turned over to City Attorney Mike Feur. Feur will now decide whether to pursue misdemeanor charges which could result in a year in jail and a fine of up to $3,000 if proven.

The civil case is being brought by three domestic workers, none of whom made the original criminal complaint, and who say they are hoping to win the money they are owed for their work by Prince Majed. In the latest court filing, which lays out in detail the allegations against Prince Majed - who is referred to in the papers as Al Saud - and the charges he will face, the trio make further claims about his behavior, which, they say, was calculated to cause them 'emotional and mental distress'.

One of the most eye-catching incidents came shortly before Prince Majed's arrest on September 25th and saw him demand that his entire household go down to the pool and strip off. According to one of the women, named in court documents as Jane Doe 1, she was told to round up workers at the home at Prince Majed's behest and was told it was because he wanted to 'see some naked p***y'.

At the time, he was 'intoxicated, abusive and aggressive' and left her 'in fear for her life'. Once outside, the women saw Prince Majed's girlfriend and another woman, thought to be the original complainant, standing with 'bruises and blood on their face and body' and 'shaking and crying'. Shortly afterwards, the LAPD arrived and removed Prince Majed from the premises.

According to the women, he screamed 'no news!' at onlookers as he was handcuffed and bundled into a police car. The pool incident and Prince Majed's arrest came at the end of three days in which the women claim to have been imprisoned in the mansion and subjected to a litany of upsetting behaviors.

The prince, who is thought to have been holidaying in California with friends and retainers, is accused of enjoying cocaine-fueled parties, cavorting with prostitutes and making the women watch while he had his penis 'stroked' by a male aide.

He also threatened to kill one of the women if she refused to 'party' with him and jumped on top of another and began rubbing himself against her in a 'sexual and aggressive manner'. When asked to stop, he allegedly then yelled: 'I am a prince and I do what I want. You are nobody!' Another says she was made to watch while a different retainer aide bent over and broke wind in Prince Majed's face – apparently at his request.

The documents seen by Daily Mail Online form part of the supporting case presented to LA Superior Court by attorney Vadim Frish. 'Eventually, the whole truth will surface and Mr Al Saud will have to bear the consequences of his despicable actions,' said Frish in a statement made to Daily Mail Online.
'No one, including a member of the royal Saudi family, should get away with this appalling behavior.' According to the case file, the women's claims stem from a period between September 21 and September 25 – when Prince Majed was arrested – and all took place at the Wallingford Drive mansion.

The women had been employed by the prince to care for the house during his American holiday, although he also brought with him three friends and a retinue of butlers and other staff – the latter now also named as defendants in the civil suit. In it, it is claimed that on September 21, Prince Majed threw a party at the property and arranged for 'multiple escorts' to attend.

During the course of the evening, he became 'increasingly intoxicated' and was seen engaging in 'illicit drug abuse' by the three women. According to the women, this was cocaine – a conclusion they arrived at after seeing white powder around the rims of his nostrils and his 'abnormally dilated' pupils.

The following evening, that of September 22, he held a second party where he 'continued to engage in heavy drinking, cocaine use and more escorts came to the residence'.

That night, Prince Majed is alleged to have 'violently' grabbed the first woman's hand 10 times and shouted 'I like you!' before insisting that she remain beside him at all times. He also threatened her, saying: 'Tomorrow I will have a party with you and you will do everything I want or I will kill you.'

The following day came the incident in which he attempted to urinate on the trio but was dragged away by an assistant before he could do so. The women claim they attempted to hide in the dining room but 10 minutes later, found themselves once more subjected to Prince Majed's bizarre behavior, including an incident in which he rubbed himself 'in a sexual manner' against the second woman.

According to the document, she attempted to reason with him, saying 'I'm a woman', only for the prince to turn around and scream: 'You're not a woman, you are a nobody! I'm a prince and I will do what I want and nobody will do anything to me!'

The women, who went and hid on a balcony, were then spotted by one of the prince's assistants who screamed at them to get back to work, adding that they must be with the prince at all times and were not allowed to have breaks. By now in tears, the trio pleaded with the aide, telling them they were terrified of Prince Majed, having already seen him physically abuse his butlers by pulling their ears, punching them in the face and by throwing things.

Again told to return to work, the second woman then approached the prince to pour him a drink – only to be subjected to a violent assault that left her badly bruised. The women then attempted to leave the mansion but discovered they had been locked in by the price's aides and were told they were not allowed to leave. It was then that the royal threatened to kill the third woman, telling her: 'You are going to go upstairs. I will be there in two minutes and you'll do whatever I want. If not, then I'll kill you.' Prince Majed then, it is alleged, became even more agitated and began to 'scream and make animal like sounds'. At this point the women managed to leave the house but without their personal possessions – forcing them to return the following day.

Once there, they were told that the prince had 'slept off' the drugs and alcohol he had consumed and would not bother them anymore. However, after telling aides they did not want to continue working for the prince, they were threatened with the loss of their wages and were again locked inside the house on the grounds that the royal needed '24-hour service'. When they did finally encounter the prince again, he was, say the women, being masturbated by another man who was 'stroking his penis'. But when they attempted to leave the room, the 29-year-old spotted them and ordered them to stay and watch.

Homosexuality is illegal in Saudi Arabia and men and women found to be gay face a range of harsh penalties, including public flogging and execution. The first woman was also ordered to stop and watch as a different aide passed wind in Prince Majed's face - again after stumbling upon the prince and his retainers in a room at the mansion. She was also asked to 'lick my whole body' by the prince in exchange for payment and says he became aggressive when she refused.

The civil suit and potential criminal charges are being contested by Prince Majed who has hired Alan Jackson, formerly part of the LA District Attorney's office, to fight the case. Jackson, who has described the case against his client as 'fabricated' and says the claims are an attempted 'shakedown' of a wealthy man, has defended members of the Saudi royal dynasty in the past.