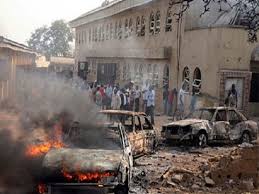 According to the report from Chibok on Wednesday, the Chibok market had since been shut down following the incident of the abduction of Chibok Schoolgirls where over 200 female students were whisked away by Boko Haram.”

"The market was only open today,
and the suicide bombers hit their target at exactly 12:54 pm. Eight people died at the spot while over 30 were rushed to the General hospital, Uba in Askira local government with two of the victims in critical condition.” he said.

Another resident of Chibok, Mallum Chibok told Our Correspondent that, despite the presence of security men in Chibok, Boko Haram has succeeded in attacking the area which is an indication that, the insurgents are everywhere.

According to him, they kicked again at the reopening of the Chibok market but some people said that normalcy has return.

He said, “I cannot understand the reason why government is insisting that normalcy has returned when you cannot go to Chibok from Maiduguri through Damboa?The road has remained shut because Boko Haram are still operating 21 kilometres away from Maiduguri. ”

Today, they opened the market and we lost eight people at a spot with over 30 hospitalized. From what we have been told, now as we speak some of the people who were taken to the hospital gave up as soon as they reached the hospital in Uba.

This is according to the text massage I just received. Look at it, they said another six died bringing the number to 14. Since the attack I have received more than 100 calls and more calls and text messages are coming in. This is very unfortunate and unbelieving.