Caroline-Danjuma's Marriage To Billionaire Husband Crashes, As He Impregnates Mistress 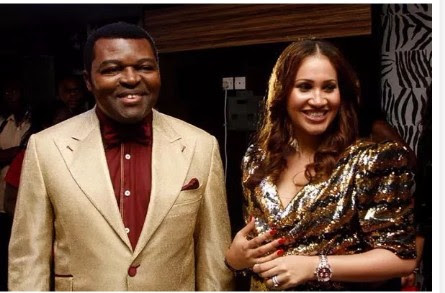 Things have fallen apart in the home of beautiful actress and Entrepreneur Caroline Danjuma!

Yes fallen apart and her marriage of 10years to Billionaire Musa Danjuma has crashed due to what inside sources refer to as 'Outside interference' and Musa Danjuma's Insatiable love for the opposite sex....

The Insider says Caroline was fighting a lost battle and every time she succeeded in getting rid of any of Musa's numerous love interests,a new one springs up from nowhere.. Sources confirm that even though she and Musa are still in the same house living together,they are actually living like flat mates and Divorce proceedings has allegedly been initiated by one of them.''

Stella Dimoko Korkus insider also shockingly reveals that the marriage which was contracted 10 years ago crashed just before the birth of the couple's last child together....A beautiful girl. Whilst Caroline is allegedly focused on moving forward,Musa's side chick named Maya, A Nigerian who lives in the UK is Pregnant with his fourth (?) child and will birth the baby in a matter of weeks.

Maya has also allegedly been bragging to close pals that every time Caroline leaves town,she arrives Nigeria and sleeps on her matrimonial bed,eats from her plate and checks out her wardrobe and swore that as soon as the divorce is through she would move in and become the Next Mrs Danjuma.. Stella Dimoko Korkus' insider rounds up......''

Caroline is over the shock and has moved on and is concentrating on her kids and her business.She has realised that it is of no use fighting over a man and she is the wiser for it.'' Pregnant side chick Maya ia allegedly currently waiting to move in and she is waiting with all her bags packed and ready!
on February 17, 2016