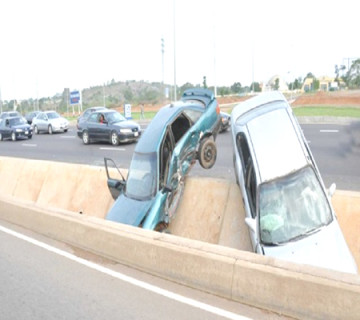 Four persons died yesterday in Ibadan, the Oyo State capital, in an accident at Uncle Joe on the Mokola-Sango Road.

It was learnt that the survivor, a woman, is on danger list with a broken leg.

The five victims, comprising three men and two women, were reportedly coming from a night club alongside others in two cars.The Nation reports.

Eyewitnesses said the three cars were speeding from Dugbe to Sango when a blue Toyota Corona, marked Lagos EKD 470BJ, lost control while trying to overtake the other cars at 5.15am.


The car reportedly collided with a concrete wall in the middle of the road. Four of the victims -a woman and the three men- died on the spot.

A source said some bottles of alcoholic wine were recovered from the car. It was gathered that it took Federal Road Safety Commission (FRSC) officials, policemen and other sympathisers an hour before the bodies could be recovered from the mutilated car.

The State FRSC spokesperson, Oluwaseun Onijala, said three male adults died. He, however, said the lone accident occurred at 2am. Onijala said preliminary investigations have shown that the accident was as a result of speed limit violation and that the driver was driving under the influence.
on March 29, 2016