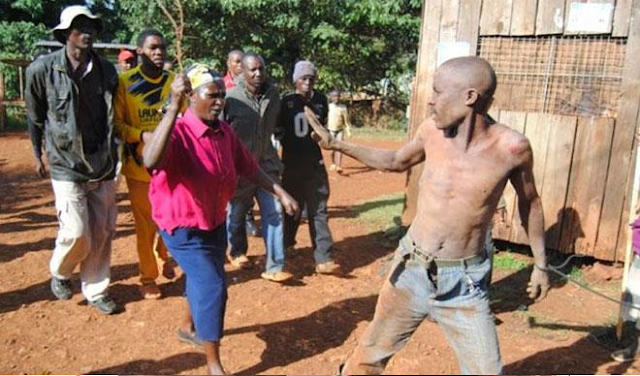 A mob on Thursday subjected a man suspected to have “stolen” another man’s manhood to thorough beating at Madalla market,Abuja.The suspect was beaten to stupor by the mob before he was rescued by members of the vigilante group in the market.

A witness, Shehu Yakubu, said the incident happened about 2:14p.m., and that the suspect confessed and returned the stolen manhood. He said the suspect, who came from Suleja, alighted from an unmarked vehicle and pretended to be buying fairly used clothes and in the process brushed a passer-by.

“The man pretended as if he had fallen down and in the process brushed the victim with his shoulder. The young man raised an alarm about the disappearance of his manhood few minutes later,” Yakubu said.

He said some people chased the suspect and stopped him from leaving the market. The suspect denied stealing the manhood and the mob that had already gathered descended on him beating him into a stupor, until members of the vigilante group rescued him, the witness said, adding that the man later confessed and and did another routine and the victim’s manhood was “restored.”

Efforts to get the reaction of the Divisional Police officer (DPO) in charge of Madalla division were not successful, but a police officer at the station said the suspect would soon be charged to court. The officer said the victim’s manhood was not missing when he was brought to the station.