Blac Chyna's Mum Says Her Daughter Relationship With Rob Is Only For TV? 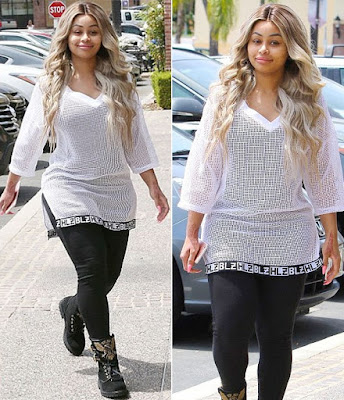 "I love Robert Kardashian and I love Blac Chyna. . . but it's not real like that if you know what Im saying! There more behind the seens going on then what uninformed people think. A Show is being filmed, Now stay with me...... put 2 and 32 together and money needs to come from somewhere right?


What do smart buisness people do in this day and age?? Play up ur strengths!!! Play into the publics minds!!! Its master minging and manipulation at a higer level believe that!! But can you blame them who in this earth would not do what they do if they had access to the level of nosy azz mothefuckas tryin up in your business??? I say to Chy and Rob DO THE DAMN THANG make your money have your children sock away that cash. MOST IMPORTANTLY sock away that cash ok!! But as an outsider I just have to say this.

"All these motherfuckas playing a big ass game." Contracts been signed and drama is orcastrated to keep your eyeballs in line!!! Tune into the next season to "see what happens" And like fools yall will tune in to see the orcastrated bullshit they sit down in MEETINGS and sicuss their moves and plan their tweets and reactions to tweets in advance!!!.

SO..... how can you call yourself an intelligent consumer of the media when you have a whoooole big ass forum for these people you are enchangted with them. This engagement and marriage was planned prepared for in a.... BOARD ROOM. Pleanned from A TO Z. This family orcastrates it all!!!!!! Like I say I love Chy and Rob both good people but don't fall for any of it cuz it is for the life blood of that damn show!!! They know how to keep yall on yall toes and don't like yall obsesed with this family more then your own family or jobs or lives. GET A GRIP ON YOUR OWN DAMN BIZ. Everybody in this arrangement is being paid bucks Chy negotiated for a deal and ended up lower then Rob when.... let's be REAL! Aint no one checking for Rob burger face until Chyna came into the picture. So how the hell Rob getting a better deal then Chyna.... but a LARGE margarine. Not no 2 or 3 dollars or hundreds here. And other fam members are asked to get involved and offered a free flight and hotel and meals and.... thats it???! U serious fam? Becuz we from the hood and dont have Hollywood agents you can just pay us in continetnal breakfast? FUCK OUTTA HERE...!! Losers and abusers. And yall obsessed fans will be sucked in by the fake theater and tune in to the next season with yr TONGUE WAGGING... what kind of shit is that. And mean while the people who MAKE THIS SEASON worth watching get PENNIES ON THE DOLLAR. USER AND ABUSER. ALL yall being played for fools with this non sense and if you have ANY damne sense.... you will keep the TV off on new season or watch something that puts $$$$# into the pockets of people who NEED IT and not the Kardashians who you prodess to hate so much. Yall a bunch of hipocrites. Im looking at this forum cross eyed thinking....

"NO damn wonder this family is so big as they are look at how much you people like you propr them up.. big up them... you are slaves I BE DAMNED if I am a slave to their media campaign." All this shit is fake and for their damned show I will do my ***UNdisclosed***** duties as I am supposed to fuck this fake shit and lying to te public for MillionS##$$$ of dollar$ and hiding that in a tax haven$ and then repeating the same propoganda 6 months later. You are ALL FOOLS UNTIL UR NOT. "
on April 22, 2016